In economist’s James K. Boyce’s mind, we are currently facing a tragedy of the commons on the global scale. We have reaped the benefits of fossil fuels over the past centuries without paying for the consequences. The greatest being global warming.

What is Boyce’s solution to this dilemma?

A carbon price. In a recent study called Carbon Pricing: Effectiveness and Equity, Boyce makes the case for a carbon cap-and-dividend. A system which would assign property rights to the “limited capacity of the atmosphere to absorb CO2” and develop a sense of “co-ownership of the gifts of nature”.

The study, published in April by the Political Economy Research Institute at University of Massachusetts Amherst, states numerous times that any carbon pricing mechanisms must be driven by emission targets, the capping of emissions, in order to drive them down, and for any prospect of meeting the goal of the Paris Agreement – keeping global warming below 1.5 – 2 ℃.

However, there are several things to keep in mind in order to ensure that such a policy is both effective and fair.

What should the price be?

Global carbon pricing mechanisms today cover about 20% of fossil fuel emissions. However, they were found to be falling short of their goals due to the prices being too low. Incredibly, after taking into consideration the subsidizing of fossil fuels, the average net carbon price in the world today is minus $8.

This makes the DC price of $20 per metric ton with increases of $10 per ton every year with a cap at $150 in 2032 seem modest. However, our carbon price will be occurring in conjunction with improvements in energy efficiency and an increased renewable energy portfolio. These simultaneous actions assist in bringing down the necessary carbon price.

How do you ensure it is fair?

One concern of increasing pricing to the necessary level to invoke timely change is the impact that will trickle down to ratepayers. This effect was referred to in the study as the “cost pass-through”. Boyce states that this pass-through is “a predictable and desirable feature of carbon pricing” because it signals users to reduce their carbon footprints. The lower your footprint, the less you pay.

Yet, it is important to have complementary mechanisms in place to ensure that ratepayers are not stuck footing the bulk of the bill, instead leaving it to fossil fuel companies – the polluters. Boyce states that this can be achieved by:

substantial share of the carbon rent is rebated to the public as equal per-person dividends, the net impact of the carbon pricing policy turns progressive.

This method and theory will, hopefully soon be put into practice through the Climate and Community Reinvestment Act of D.C. The proposed policy would reinvest a large portion of the revenue raised back to D.C. residents, with portions also allocated into energy efficiency and renewable energy programs and tax cuts for small businesses.

What makes the rebate fair?

It is important that a carbon fee-and-rebate takes into account that every household does not have the same carbon footprint. This is a factor which must be adjusted for when establishing the rebate mechanism. Simply put – those who consume more pay more, and those who consume less pay less. Sound familiar?

One of the best mechanisms we have to meet the goals of the Paris Agreement is carbon pricing. Methods like those studied by Boyce and put into practice by legislation such as the Climate and Community Reinvestment Act of D.C. are tools which are effective in reducing carbon emissions quickly, encouraging innovation and new technologies, and most importantly, done in a manner that is just.

Read the full study below:

*NOTE: This is a draft bill from the Put a Price On It DC coalition – the final bill released by the DC Council may differ as it is revised and edited.

After years of organizing and deliberating, the coalition has put together a draft of a bill that would place a fee on carbon pollution and rebate the revenue to DC residents. MANY  thanks to the several policy experts, researchers, coalition partners and legislative drafting volunteers who have worked relentlessly to bring the coalition’s vision into reality.

See the bill in full below — click through to see it all!


For the visually minded among you, check out this cool graphic showing how the policy would work: 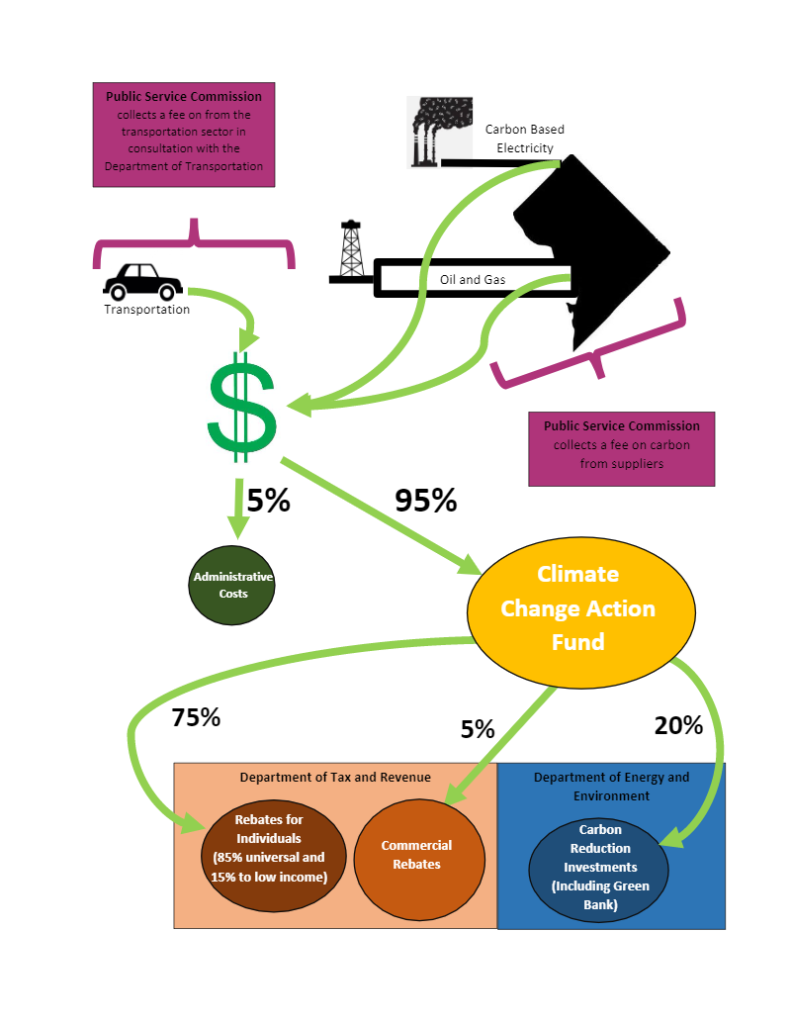 Holy moly. Last week, nearly 150 PEOPLE turned out to the Wilson Building to call for a price on carbon in DC. We stood alongside Councilmembers Robert White (At-Large), David Grosso (At-Large), and Charles Allen (Ward 6), as well as labor, faith, and justice advocates, who all gave compelling calls to pass this policy. Our movement is truly breaking ground.

Now, we need to amp up the pressure.

Will you send a quick message to your Councilmember encouraging them to introduce a carbon fee-and-rebate policy? Tell them we can’t wait — it’s time to introduce the Climate and Community Reinvestment Act. You’ll also have the opportunity to say thanks to the Councilmembers who came out to last week’s rally.

On Wednesday, SEIU Local 32BJ member Judith Howell shared how pollution from idling trucks filled her apartment and sickened her lungs that very morning, calling for the carbon rebate to clean up the air. Reverend Kip Banks from the East Washington Heights Baptist Church made us laugh with tributes to Beyoncé’s lyrics “put a ring on it” and shout to put a price on pollution if we love Creation. Mike Tidwell of CCAN urged you and I to make this mission part of our daily life until we win. And of course, our champion Councilmembers all spoke passionately about why they are fighting for a carbon rebate in the District. Then we stormed the building to inspire the rest of the Council!

Want to relive the excitement?  Check out the coverage from NPR and teleSUR, and browse this great photo album. And I hope you’ll take a second to read the press release of the Councilmembers’ calls for action and share it with anyone skeptical that we can get this done.

Our vote count estimates are getting mighty exciting. But every one of us needs to push hard until all 13 Councilmembers and Mayor are out there celebrating victory on the front steps.

Take one second right now to send your Councilmembers a message of support for the carbon fee-and-rebate solution.

As NPR reported, “D.C. could become one of the first jurisdictions in the country to put a tax on carbon emissions.” This is because of your focused activism. This is direct democracy in action, my friends–take the high-five and pass it on.

It’s time to advance precedent-setting climate protection and economic justice, right here in the District of Columbia Our proposed carbon fee-and-rebate policy would hold polluters accountable for the costs of climate change, level the playing field for clean energy, and lift up every resident of DC (that’s you!) with frequent carbon rebate checks in your bank account.

Send your Councilmembers a message today! Tell them we can’t wait for strong climate action in D.C.

Thanks for rocking it last week and every day, 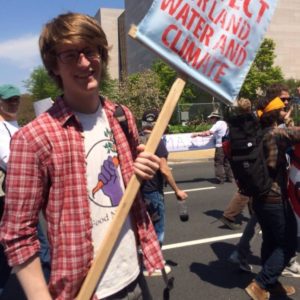