Faces of the Campaign is an ongoing series featuring our key organizers and stakeholders involved in “Put A Price On It, D.C.” Our coalition — more than 45 groups as of this writing — is comprised of racial justice activists, union workers, health advocates, moms, dads, kids, retirees, and business-owners alike. Assata Harris is the Climate Justice Organizer the Chesapeake Climate Action Network.  Here’s her story. 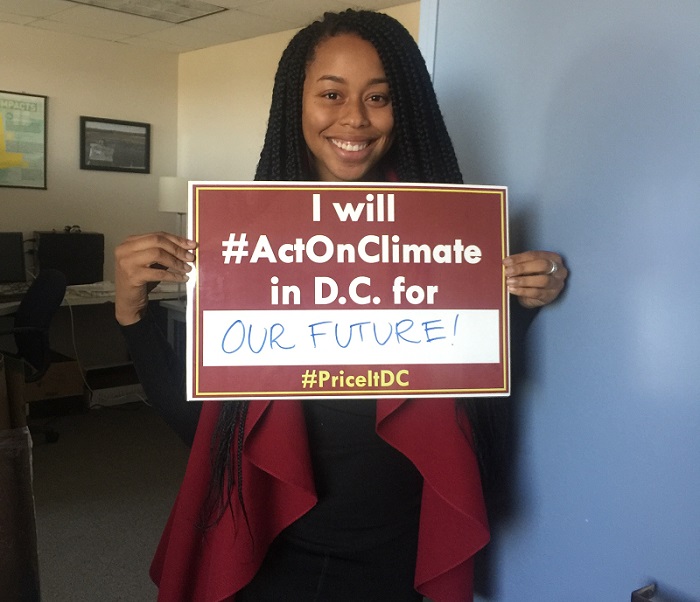 When I think of climate justice, I have to be honest with you…. racial and economic justice are not typically the first thing that pops into my mind. However, after I became involved with the “Put A Price On It, D.C” campaign I realized that climate justice and environmental justice don’t have to be either/or they can be both. This policy matters to me because, like you, I recognize climate change as a central issue of our time that affects us all. This campaign goes to the next steps and tackles economic justice at the same time.

What has been your favorite moment in this campaign so far?

I think my favorite moment of this campaign was different moments of interacting with amazing volunteers of all different backgrounds who are really committed to fighting climate change while lifting up our most vulnerable communities. It feels wonderful everyday to wake up and know I am a part of a movement that reflects the diversity of the world we live in.

My biggest accomplishment thus far is really learning how carbon pricing actually works, not just in a theoretical level but in a way that makes sense for our communities. I must admit, it can be very complicated. But with all of the support that CCAN has provided, this journey to understand carbon pricing has been very straightforward and informative! Carbon pricing is the most creative way to tackle two issues of our time: economic justice and climate justice.

Assata Shakur, my namesake, a personal hero of mine! She was a great community organizer, who used passion as her strategy.