Groundbreaking “Clean Energy DC Act” Will Mandate 100% Clean Electricity by 2032, Expected to Become Law by End of This Year
Councilmembers Did Not Yet Vote to Remove Harmful Amendments Inserted by Pepco-Exelon, May Do So in Second Reading

WASHINGTON, DC — Today, the DC Council gave preliminary approval to a landmark climate policy called the “Clean Energy DC Omnibus Act of 2018,” known as the “Clean Energy DC Act.” The Council voted unanimously in favor of the bill, which would strengthen the District’s renewable electricity requirement to 100 percent by 2032, raise money to weatherize low-income homes, and more. Councilmember Robert White (At-Large) did not vote because he was not present, but he is a co-sponsor of the bill. 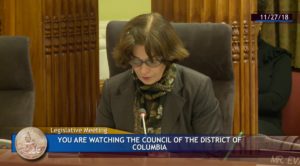 The vote took place in the wake of an alarming new federal report showing climate change is already affecting Americans nationwide, including residents of DC. The Fourth National Climate Assessment, released by the Trump Administration the day after Thanksgiving in an apparent effort to reduce news coverage, paints an alarming picture of current and future economic and humanitarian harm to Americans unless the US and nations worldwide transition off of fossil fuels very quickly.

The “Clean Energy DC Act” would put DC on the fastest timeline to 100 percent clean electricity in the country — California recently passed a bill for 100 percent carbon-free electricity by 2045. It would cut DC’s total emissions almost in half by 2032. The DC Council is expected to vote on this bill for the second time on December 18, after which it will be sent to Mayor Muriel Bowser for her signature.

“Thanks to our DC Councilmembers, we are on track to pass one of the strongest climate laws in the country,” said Camila Thorndike, DC Campaign Director at the CCAN Action Fund, sister organization of the Chesapeake Climate Action Network. “It’s inspiring to see the full strength of our coalition in these culminating moments. I particularly applaud the Councilmembers who have taken a stance against Pepco’s closed-door tactics to monopolize our energy future, and hope the rest do the same in the second reading. If we go along with the status quo, the results will be devastating. We need a new energy policy for a new District, just blocks from Trump’s White House, and with the Clean Energy DC Act, we can make it happen.” 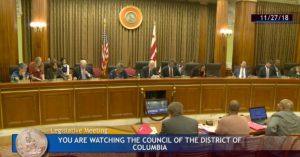 Today the Council also refrained from voting down a concerning amendment that could undermine the energy efficiency portion of the bill and could have a negative impact on DC ratepayers. The amendment, which was added in by Councilmember Kenyan McDuffie (Ward 5) at the suggestion of Exelon-Pepco days before the vote, would give Pepco authority over how efficiency investments are made, undercutting the longstanding decisions DC has made to support independent-run efficiency programs instead. In the Committee of Environment and Transportation meeting on the bill, Councilmember Charles Allen (Ward 6) explained how it could allow Pepco to “double dip” — to charge ratepayers twice for the same energy efficiency investments. Councilmember McDuffie passed out a revised version of the amendments before today’s vote just minutes before they were accepted. According to Councilmember Allen, the revised amendments addressed some of the concerns but he expects to further address the amendments before the second reading instead.

“The Sierra Club is happy the DC Council has taken the first vote in favor of what would be one of the strongest clean energy bills in the nation,” said Mark Rodeffer, Chair of the Sierra Club DC Chapter. “But our work for the climate isn’t done, and on the second vote, we ask that the Council restore a provision for long-term power purchase agreements for renewable energy. Pepco had this part of the bill killed in the dark of night, and as a result, DC’s greenhouse gas emissions will go up 8.1 percent and electricity customers’ bills will go up as well.”

“The DC Council will give my new baby girl the best gift ever — an ambitious plan to transition from fossil fuels to clean energy,” said Payal Shah Martin of Moms Clean Air Force. “It appears that enough council members support this bill to ensure that it becomes law. I can’t wait to send thank you notes to the Council after they pass this bill without secretive changes from dirty energy lobbyists.” 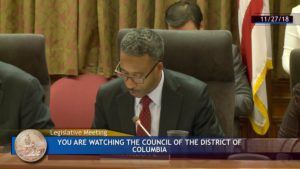 “D.C.’s clean energy bill is a win for working people, who are the most vulnerable to climate change. The clean energy bill will go a long way towards ensuring that clean air and water are a right for everyone, not a privilege enjoyed only by the wealthy,” said Jaime Contreras, 32BJ SEIU Vice President.

“This is a huge win for District residents and the thousands of activists who fought to make this city a global climate leader,” said Justin McCarthy, Communications Director of the DC Statehood Green Party. “I can’t think of a more fitting or symbolic place to pass the most aggressive climate legislation in the country than the nation’s capital city of Washington, DC. Make no mistake, this win is part of a larger movement both here in the District and across the country, and we have no intention of slowing down. Tomorrow we get right back to work.”

In addition to dramatically expanding the Renewable Portfolio Standard, the “Clean Energy DC Act” also takes aim at emissions from home heating and transportation. It would scale up an existing heating bill surcharge called the Sustainable Energy Trust Fund (SETF), which would raise tens of millions of dollars to finance renewable energy projects and provide assistance to low-income DC residents.

The bill would create efficiency standards for new and existing buildings and would fund local programs to assist low-income residents as the District transitions to more sustainable clean energy systems. It would also adjust the vehicle excise tax to incentivize clean cars and make owning dirty vehicles more expensive. The legislation also authorizes the District to put a price on transportation fuels if Virginia and Maryland commit to the same.