WASHINGTON, DC ⎼ On Monday, October 29, in a park across the street from the John A. Wilson building, supporters of the Clean Energy DC Act and CCAN played a game of beach volleyball. The game aimed to promote “endless summer” temperatures if the bill to climate change isn’t addressed by the DC Council. The final vote is scheduled for December 1. 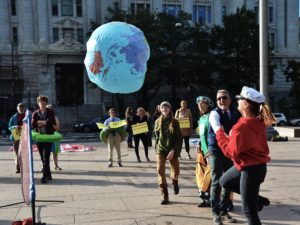 The Wilson building was the site of the final public hearing on the Clean Energy DC Act with councilmember Kenyan McDuffie. Before the final hearing, dozens of climate advocates testified to urge DC Council to act on the climate change and protect their communities and generations to come.

Sergio Martinez, a Catholic University graduate, testified on the importance of passing the Clean Energy DC Act as a way to care for neighbors and communities. “As policy-makers, you have the opportunity to act on climate, protecting our neighbors in DC,” he stated. 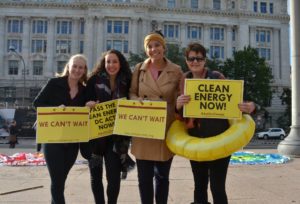 Leaders from Muslim, Jewish, Protestant and Catholic faith traditions also testified in favor of the Clean Energy Act. Avery Davis Lamb, director of Faithful Advocacy said, “Climate change and clean energy change is a moral issue that deeply affects our communities, that is why we are here together today to speak out in faith and support the Clean Energy Act.”

Darcy Hirsh of the, Jewish Community Council stated, “The Jewish community has a sacred imperative for creation of our world. Setting the District on a path to 100% clean energy is a moral necessity.”

The climate is rapidly changing and, according to recent reports, world leaders have less than 15 years to take extreme action and prevent damage to the earth. Passing the Clean Energy DC Act bill is the answer to the IPCC.