The “Clean Energy DC Act” gains momentum with a huge turn out at city council hearing after the shocking United Nations report on the environment.

Just after the Senate confirmed an anti-environment majority to the Supreme Court, the United Nations released a new report that says we have a mere ten years to cut the rate of global carbon emissions in half. Gut punch.

So Tuesday’s incredible hearing for the “Clean Energy DC Act” could not have come at a better time, and despite all the turmoil, it was an AMAZING day.

And here’s the even better news: Councilmember Kenyan McDuffie has scheduled the next hearing in his committee on Business and Economic Development! 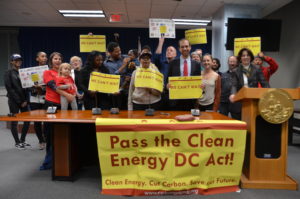 Please join me in thanking Councilmember McDuffie for scheduling a hearing to advance the Clean Energy DC Act through his committee. Politicians get a lot of heat for inaction on climate — let’s be sure to thank them when they do the right thing!

The room was packed at Tuesday’s hearing. About 90 people signed up to testify in Councilmember Cheh’s Committee on Transportation and the Environment — and nearly all of them testified in strong support. Experts testified that 100% clean electricity by 2032 is not only possible, but that the target date should be moved up to 2026. Advocates praised the groundbreaking proposed energy efficiency standards for existing buildings, which are the largest source of local pollution, as well as new funding for the Green Bank and Sustainable Energy Utility.

There’s nothing like seven straight hours of climate calls to action to leave a gal feeling hopeful and empowered again!

While Councilmember Cheh’s hearing gave us a much-needed boost of energy, rest assured that the opposition isn’t going to let this big bill just walk over the finish line. They are hyping up concerns about ratepayer impacts — but ignoring the costs of inaction. They are arguing we need more time for study — as if the last three years of stakeholder dialogues haven’t sufficed. They are acknowledging the severity of the climate crisis in one side of their mouth, and out of the other, saying “not this, not now, not here.”

At Councilmember McDuffie’s hearing on the Clean Energy DC Act, we’ll need to turn out in even bigger numbers, with even more persuasive stories on why it’s time the District stepped up to the climate challenge.

But for now, please send Councilmember McDuffie a message of thanks for scheduling a hearing on this critical bill!

The hearing is scheduled for October 29 at 10:00 am, so mark your calendars (and you’ll be hearing more from us on that soon). In the meantime, we encourage you to submit written testimony in support of the Clean Energy DC Act to the committee staff, Ms. Benjamin, at abenjamin@dccouncil.us. Written testimony will be accepted until October 23rd. Reply to this email for talking points or any questions about how to submit testimony!

See you soon, friends, and thank you for all your hard work on this campaign of hope.