Last year DC Mayor Bowser made a pledge to not only the people of DC, but to the citizens of the world. This pledge was her commitment to the Paris Climate Accord.

The pledge included a vow to reduce DC Greenhouse Gas (GHG) emissions by 50 percent by 2032 and 80 percent by 2050 compared to 2006 levels. Mayor Bowser continued to push expectations higher by pledging to make the District carbon-neutral by 2050 and by joining other cities in the C40 group.

All of these ambitious targets require a plan, and in 2016 the DC Department of Energy and Environment (DOEE) released its Clean Energy DC plan. This is an outline of how the District can reach decarbonization by 2050. 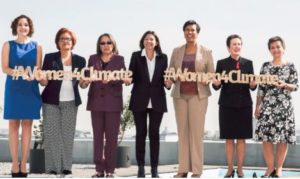 Unfortunately, it is only an outline and accomplishing the ambitious goals set by Mayor Bowser will require swift legislative action. Legislative action that creates and develops the necessary mechanisms for success.

It has been made clear in the weekly Working Group meetings that we are not on track to meet the District’s 2032 climate and energy goals.

A central instrument needed is a carbon price. The “Put A Price On It, DC” coalition has proposed a carbon fee-and-rebate policy in a draft bill called the “Climate and Community Reinvestment Act of DC” as a key tool to meet our goals. But before getting into that, let’s go over how DC is off track.

Meeting these goals in DC hinges on the origin and consumption of energy. This is because the majority of DC energy is still sourced from fossil fuels. The share of electricity provided by natural gas grew by 62 percent from 2013 to 2016. This growth was driven by the economics of cheap natural gas, and it only demonstrates the power of a simple price signal: the least expensive energy source will win. Carbon pricing can bring about another shift — a shift to renewable energy.

The Clean Energy DC plan is heading in the right direction. It focuses on improving building energy efficiency, transportation, and energy supply. Unfortunately, it does not outline in detail any mechanisms that will accomplish the targets set by Mayor Bowser and the DOEE.

There is the additional dilemma before us that there is currently no plan to achieve the 80 percent by 2050 goal, and that C40 in their Deadline 2020 called on cities in developed nations that also have healthy economies to have more ambitious date targets. DC’s goals are not aggressive enough as they stand, and they certainly cannot be met with the structures in place.

There are many questions raised when considering DC’s plan to reduce GHG emissions. This is a testament to how little the District has accomplished in terms of energy efficiency and local (renewable) generation. Even though there has been a significant decrease since 2006 due to the switch from coal to natural gas, these methane-driven emission reduction claims should be viewed with skepticism. The Environmental Defense Fund reported that emissions of natural gas (methane), which is upwards of 86 times stronger than carbon dioxide, are dramatically higher than official accounts. In Pennsylvania, which is within the grid that powers DC, fugitive methane emissions cause the same near-term climate pollution as 11 coal-fired power plants. 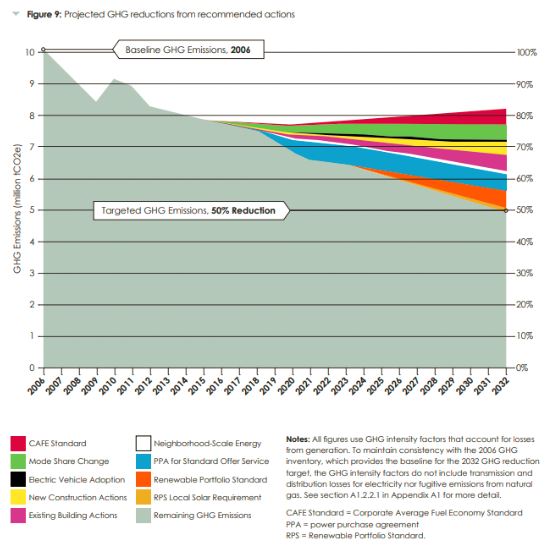 Even if the accounting behind DC’s climate progress were trustworthy, it is highly unlikely that the rapid decline in emissions will continue without substantive new policy interjections. According to the Clean Energy DC plan the 50 percent goal can be met. However, at least 25 percent of the policies cited have not been introduced.

A sizeable amount of GHG reductions to meet the 50 percent 2032 goal are cited as coming from the federal Corporate Average Fuel Economy (CAFE) Standard which is under threat. The District is resisting this rollback, but the details on actual emission reductions, enforcement and monitoring remain unclear.

An additional 6.4 percent comes from assumed changes in transportation changes, designated above as “mode share.” This transition would require 50 percent of people to use transit, 25 percent to walk or bike, and the remaining 25 percent to be driving.

Three things that are clear about the Clean Energy DC plan: There are too many assumptions, we are trading one fossil fuel for another, and the goals are not on an aggressive enough timeline. Closing the emissions gap demands more ambitious approach. A carbon tax is a sure-fire way to start ACTUALLY making meaningful reductions in emissions.

As of now the planning for energy use reductions will only result in an 18 percent reduction. This is a large divergence from the 2032 goal of a 50 percent. Similar to the GHG reductions, the projected energy use reduction rely heavily on the federal CAFE standards, accounting for 10.1 percent of the total expected.

A portion of the 32 percent gap can be made up for by implementing a strong carbon price. It would signal a shift of behavioral change and encourage people to be more conscious of their energy consumption by reducing use and looking for more energy efficient alternatives within their own household.

Additionally, revenue from a robust carbon fee would be directed to greenhouse gas reduction programs which focus on energy efficiency, supporting greener buildings, and the installation and modernization of heating, ventilation, and air conditioning, and other large building systems. All of these actions would go a long way in reducing energy use in DC. 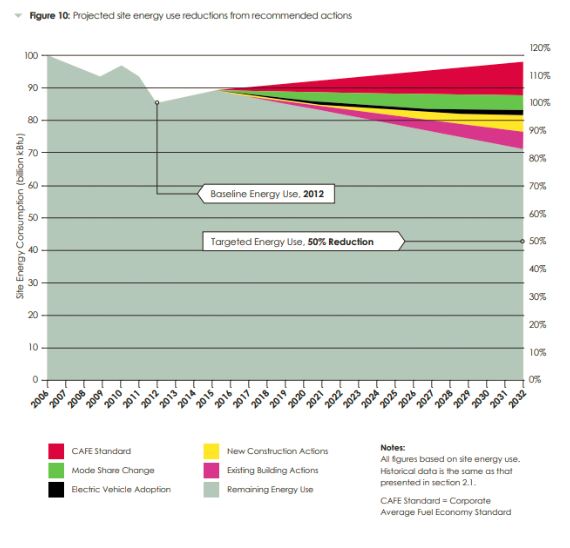 Unfortunately, the renewable energy projections also fall far from the mark. There is a gap of 18 percent between the goal and current estimates. This is because meaningful action has not yet been taken to increase renewable energy sources.

A more comprehensive and timely solution would couple a strengthened RPS with an equitable carbon price. With an economy-wide fee on carbon pollution, DOEE’s existing work would be supercharged.

Just imagine — when the true cost of fossil fuels is appropriately accounted for, lines will form around the block for programs like Solar for All! Reducing emissions, advancing clean energy in the near term, and closing the gap towards our 2032 goals. 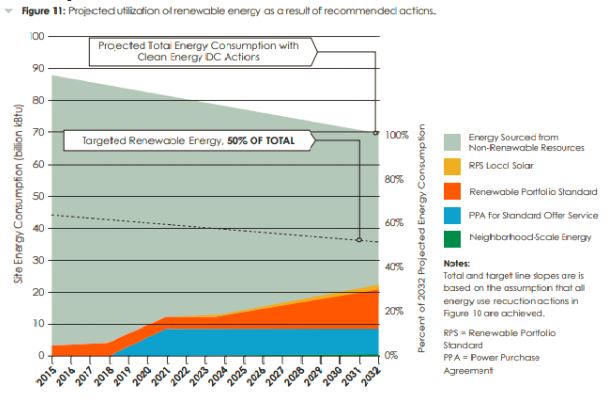 What we’re proposing: Climate and Community Reinvestment Act of DC

The District requires a strong and equitable carbon price to transition to being carbon-free. Fortunately for the DOEE, the Put A Price On It DC coalition has done the planning and analysis to draft a instrument that would put DC on the path to attaining all of its climate goals. A strong, fair and equitable carbon fee-and-rebate policy.

The “Climate and Community Reinvestment Act of DC” would reduce GHG emissions from the use of electricity, natural gas, and home-heating fuel by 23 percent by 2032. Additionally, transportation emissions would fall by approximately 6-10 percent compared to DC’s current level.

In order for a carbon fee to be constructive in meeting the Paris Climate Agreement, it needs to be comprehensive and fair. The set price should be strong enough to catalyze an energy transition and change behavioral patterns of energy consumption. The coalition’s proposal has a price beginning at $20 per ton of carbon dioxide with increases of $10 every year, to eventually reach $150 per ton 2032. A clear price signal will be sent and instantly yield clean energy growth, energy efficient construction, and investments based on behavior-change. 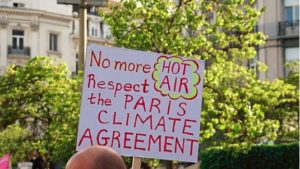 If DC Council passes a carbon pricing bill similar to the coalition bill, the policies outlined in the Clean Energy DC plan would be no longer be simply “figureheads,” they would be achievable and manageable.

In the first year, the coalition carbon fee would generate an estimated $141 million, with economic models predicting that revenue would top off at $596.5 million in 2032.These funds would contribute to electricity system modernization, energy efficiency and renewable energy.

The bill proposed by the “Put A Price On It, DC” coalition is backed by more than 70 organizations, faith groups and businesses. It has received input from hundreds of community leaders, engaged thousands of residents, and is based on science, fairness, durability, and economics.

With multiple apparent gaps in the DOEE plans to meet Mayor Bowser’s and the Districts pledges, another instrument is required to facilitate all three of Clean Energy DC goals: carbon pricing.