During a press conference on June 5, we discussed the differences between Councilmember Mary Cheh’s draft proposal for a carbon pricing bill and our own proposal. To clear up any confusion, here’s some context on what’s happening with the two differing proposals.

After you read, send a message to Council Chairman Phil Mendelson urging him to introduce the carbon pricing bill as soon as possible.

We appreciate Councilmember Cheh’s leadership towards strong climate policy. Since October, her office has convened a “working group” to fulfill the Chairman’s request for a consensus approach. In May, Councilmember Mary Cheh’s office released a discussion proposal that aims to find a compromise between the aims of advocates and business representatives.

We are excited to see that the proposal prices heating fuels, takes an innovative approach to transportation, and strengthens the Renewable Portfolio Standard, or RPS. It directs revenue to residential rebates, the Green Bank, and energy efficiency.

Councilmember Cheh’s proposal is headed in the right direction. Before passage, however, we believe that it must be strengthened.

In order to meet Mayor Bowser’s commitment to the Paris Climate Agreement’s emissions reduction targets and to carbon neutrality by 2050, we need a much more robust price on carbon.

The Coalition remains committed to a policy that starts at $20 per ton in 2019 and rises $10 per year to reach $150 per ton in 2032. If that sounds high, consider that even conservative national proposals begin at $40/ton, and experts recommend that prices reach the hundreds – if not thousands of dollars – within a few decades.

Councilmember Cheh’s proposal cuts this price path ambition in half. It begins pricing only heating fuels at $10/ton, increases only $5/year, and caps at only $100 in 2038. As a result, the Coalition proposal cuts 2.2 times more carbon from oil and natural gas use. It would cut climate pollution in DC by at least 23% by 2032. The alternative will reduce less.

There is also a reduction in scope of the carbon price itself. Cheh’s proposal excludes electricity from the price, which by 2013 accounting comprises about 55% of District emissions. Instead, her proposal relies on Chairman Mendelson’s 100% by 2050 RPS bill introduced last month.

The best research on what is necessary to avoid the worst impacts of climate disruption, for instance the Beyond 2 Degree Scenario from the International Energy Agency, shows that the United States and other developed countries need to move to 100% clean energy across the entire economy (not just electricity) by 2050. This necessitates a move to 100% clean electricity even sooner so that renewable electricity is able to power transportation and heating needs by 2050. If the Council is intent on reducing electricity emissions via a new RPS, the target date must be significantly sooner.

That said, we applaud innovative elements of Councilmember Cheh’s proposal that would lead to additional clean energy development in the region, and push Pepco-Exelon to green its energy mix faster.

We also applaud her approach to transportation, which mirrors our own. The final bill should specify that DC will price gasoline and diesel once one neighboring jurisdiction does the same.

Our Coalition continues to believe that rebating 75% of the money to District residents is the best use of the funds. However, we are open to Cheh’s proposal of appointing a temporary commission to address how to fairly send revenues back to low and middle-income households.

We again wish to thank Councilmember Cheh for her sincere efforts on pricing carbon in the District. It has been a remarkable investment of time and care that reflects how seriously she takes the issue of climate disruption. We look forward to working with the Council to introduce a strengthened bill before the summer recess and passing it this year. 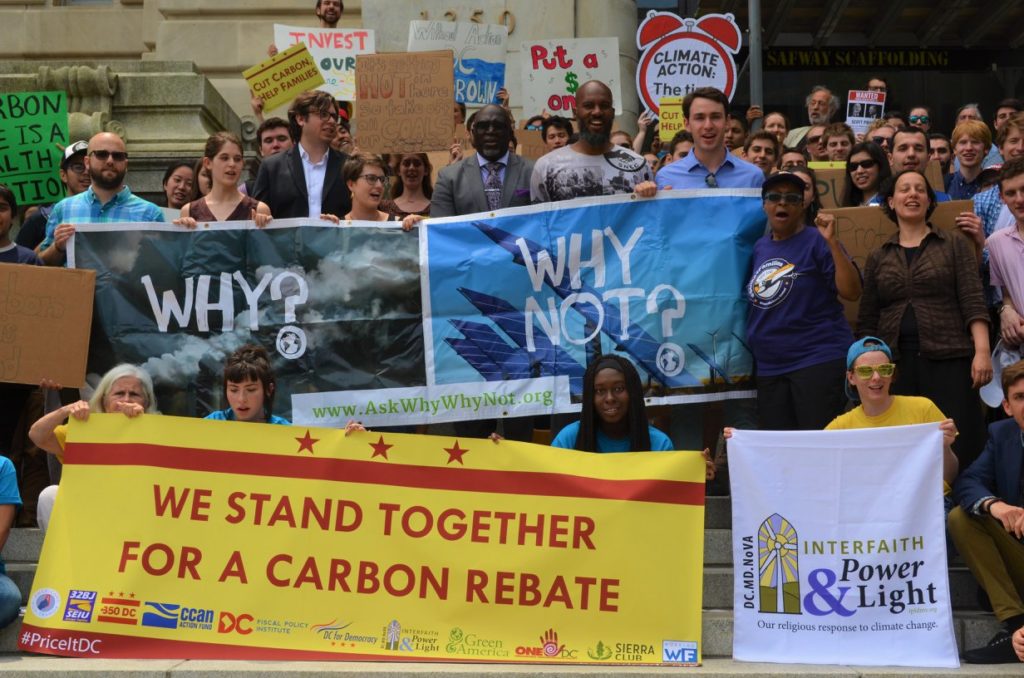