Faces of the Campaign is an ongoing series featuring our key organizers and stakeholders involved in “Put A Price On It, D.C.” Our coalition of 70 organizations is comprised of racial justice activists, union workers, health advocates, moms, dads, kids, retirees, and business-owners alike. Michael Riley Price is a student fellow working on the campaign. Here’s his story.

My name is Michael Riley Place and I am a graduating senior at St. John’s High School in DC. I am an Our Climate Fellow working on the campaign as part of the steering committee. 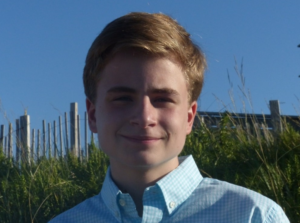 When I was 13, my family moved to New Zealand. Although I have been passionate about the environment my entire life and had learned about climate change, the implications a changing climate has on our Earth never really struck me until I was standing in a ravine carved out by the Fox Glacier. While the glacier still exists, century old images showed it to be significantly larger, stretching through the entire ravine. I realized then, that in only one hundred years, a relative blink of an eye, human society changed the world so much.

Besides the melting of glaciers, there has been intense melting of the ice caps, bleaching of coral reefs, and desertification of rain forests, all because of climate change. The government of New Zealand has always been a leader on environmental issues, recently ratifying the Paris climate agreement and banning offshore drilling. I have come to realize that while the United States has endangered ecosystems just like New Zealand, it has not taken the same action to ensure these places are preserved.

The tricky thing about climate change is that no matter where someone lives, their carbon footprint affects the entire world community. As climate change is the product of billions of people emitting carbon in their daily lives, a few individual decisions to bike to work or switch light bulbs is not going to make a significant difference. Entire communities must come together to move towards sustainability, by ensuring that people pay for their pollution. I believe that putting a price on carbon would not only discourage carbon pollution in the district and allow Washingtonians to reduce climate change as a united community, but by being passed in the nation’s capital it would set a national precedent for more cities to follow. Also, the rebate would ensure that communities unable to pay for the increased heating and transportation costs are not stifled by them financially.

This is the first campaign, environmental or otherwise, that I have played a role in. I love the positive energy of the people involved with the campaign. Although everyone has been working for a long time to ensure that climate change is addressed, and lately it seems our government is taking a step back in environmental progress, everyone still has hope. Hope that if we keep working towards a sustainable future, we will get there.

The steering committee is also made up of a very diverse group, with members hailing from government, businesses, faith-organizations, nonprofits, or grassroots backgrounds. I have learned a lot about the different perspectives that go into forming a successful campaign.

The effects of climate change are so numerous and far-reaching that it plagues various communities differently. The United States has been experiencing increasingly hotter temperatures and irregular weather patterns. While many of us have the power to manipulate temperatures using air conditioning, there are many Americans who cannot afford this luxury, and billions around the globe who do not have access to it, these people are forced to deal with these rising temperatures. Irregular weather patterns are not only an inconvenience, those who lie in the path of storms face complete devastation. Additionally, many species are adapted to certain climate patterns, causing them to experience the changes intensely.

My favorite moment was participating in the lobby day in March. This was my first experience lobbying and I found it extraordinary to see elected officials speak directly with their constituents about the changes they want to see in their community. Council members Robert White and Stephen Grosso showed their support for the policy and this was really cool.

I witness community power every meeting of the steering community. The diversity of groups represented in the committee is amazing. Student groups, clean power businesses, environmental networking groups, a youth run political action committee, faith organizations, grassroots community groups, and even the Citizens Climate Lobby come together to plan the next steps. This ensures the policy is addressed from all angles. Furthermore, volunteers from the campaign have promoted the policy everywhere from ANC meetings to church events, bringing news of the policy directly to the community. This collaboration was apparent during the youth lobby day, where many people turned out for meetings with representatives and a rally in front of the Wilson Building. It was extraordinary to see so many different people united around one vision.

There have been so many great moments of this campaign, and with the introduction of the bill just around the corner, I know the best moments are yet to come. One of my biggest personal accomplishments of the campaign was writing a speech about why “the bill is late” and delivering the speech at the rally preceding the youth lobby day. As a high school student, it is my generation that will witness the worst parts of climate change, yet we lack the vote and attention of policy makers, I feel as if this is lost on our government. It was extraordinary to give my perspective and then meet with the policy makers directly, giving me hope that in time our leaders will come to realize the importance of protecting the environment for the sake of future generations.

A Parrot. This parrot would be fluent in several languages and help me to translate, it would spy on people, deliver food to my house, and be able to have deep and philosophical conversations.