Faces of the Campaign is an ongoing series featuring our key organizers and stakeholders involved in “Put A Price On It, D.C.” Our coalition of 70 organizations is comprised of racial justice activists, union workers, health advocates, moms, dads, kids, retirees, and business-owners alike. Barbara Briggs is a volunteer for the campaign. Here’s her story.

My name is Barbara Briggs. After over 20 years running campaigns focused on international labor rights (child labor and sweatshop abuses in factories making clothing and consumer goods for the U.S. market) I am in the process of a professional shift, to work on climate issues. I am supposedly “taking a break” for the first time in my 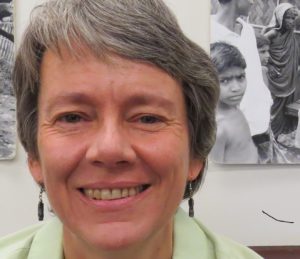 adult life, but busier than ever working on efforts to transition our society away from fossil fuels and toward renewable energy sources.

I’ve always cared deeply about the environment, but the issue of climate change took on screaming urgency for me after I moved to Pittsburgh late in 2008. Western PA was in the middle of a huge resurgence of gas and oil extraction made possible by fracking. I started meeting people who could no longer use the water in their wells, whose kids were sick, whose livestock was dying.

I went to an opening of Josh Fox’s documentary Gaslands, really not knowing what to expect, and 2,000 people showed up! Many weekends we would go to a family place in the Allegheny National Forest and the destruction was horrible: bulldozed roads and gas pads all over the forest, silted streams, the smell of gas everywhere. It really drove home the damage that the fossil fuel industry is doing, on the ground in communities and natural areas all over the country, and contributing to global warming.

The campaign to put a price on carbon in DC is winnable, concrete and would allow us to make a substantive contribution toward moving our society away from fossil fuels. Something we must do and quickly, to prevent catastrophic climate disruption.

We are already losing species at a record rate. What we do now can save species, ecosystems, arable land, and communities that will otherwise be lost to sea-level rise. Economists tell us that pricing carbon is the most efficient way to accelerate the urgently needed transition away from fossil fuels and many business leaders agree. Meanwhile, using a substantial proportion of the funds to provide a rebate to citizens will help assure that this does not turn into a regressive tax that (once again) leaves low income and working families bearing the cost of change.

The Put a Price On It campaign is unique in that it is very concrete, local and winnable, yet would have significant environmental and economic impacts. We are pushing for real change, in a major U.S. city that also just happens to be the nation’s capital.

I grew up in New England and my family is still there, mostly in Massachusetts. Winter is not normal or predictable anymore. It is warm when it should be consistently cold. Then in April this year we got hit with four major storms. The spring bulbs don’t know what to do. The trees don’t know what to do either. Fruit blossoms become frozen and collecting maple sap for syrup is impossible some springs. There’s more and more tree loss, due to stress and weird weather. Tree diseases, and human diseases like West Nile virus and Lyme disease, are becoming much more prevalent–moving up from the south and without good, hard freezes to kill them off. 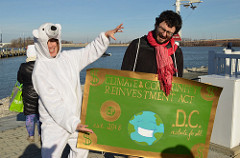 My favorite moment? I think that would have to be jumping into the Potomac River in January. Finally succeeding in cleaning up the spreadsheet to organize our outreach to the neighborhood ANCs–that would be a close second, but it took longer.

I think we are witnessing growing community power right now, in the Put a Price On It campaign. We–a growing number of volunteers and coalition members–are raising public debate about climate change and taking responsibility into our own hands, right here in our own city. We are taking that discussion to every ward, every neighborhood, every local elected official. It’s too broad to see all at once. Often the specific events seem small. But taken all together, it is a remarkable display of growing community power.

I think my biggest accomplishment to date would have to be the climate event I organized at Friends Meeting of Washington to build support for the Put a Price on It campaign. The room was full. The panel, including Camila Thorndike, was really powerful. The discussion was really energized: People didn’t want to stop. And we ended up getting a lot of volunteers.

Best place to get breakfast in DC?

Best place in DC to get breakfast?: Definitely The Diner on 18th Street, open 24-7. I’ve had my bacon and eggs and coffee there at the crack of dawn, before heading to CCAN’s Polar plunge, and late at night after long ANC meetings.