The link between housing and climate change might not be an obvious one. But as they always say in real estate, “Location, location, location.” And no one wants to be located where climate impacts are bound to be worst. Housing inequality is already a striking problem in DC. Climate change would make it worse.

What can we do? A carbon fee and dividend will both effectively lower carbon emissions and give residents relief from our ongoing crisis of displacement by gentrification. Making polluters pay will push the city towards clean energy, but it’ll also put money in the pocketsof residents working to keep up with surging rents.

Some regions will be affected more than others by climate change. For example, Floridian real estate could be decimated by encroaching seas. But it’s also true that environmental impacts are unequally distributed at the city level, too. Neighborhood-by-neighborhood, block-by-block, a “game of inches” will play out as insurers map flood risk. 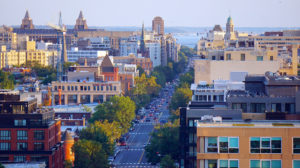 DC knows that some neighborhoods bear the brunt of pollution. Residents of Ivy City, a Northeast neighborhood without a high income level, have fought for years to improve their air quality by asking the city to stop idling its bus fleet outside their homes. Here, as elsewhere, the poor are disproportionately harmed by pollution; they can’t afford to get out of its way.

As climate impacts become more apparent, an information gap will arise. The banks and real estate agents will have access to complex modeling that predicts the areas where flooding and other impacts are most likely to occur—down to the inch. These areas will be the cheapest ones, with the market shunting poor families into harm’s way.

A vision of this future is articulated in award-winning science fiction author Kim Stanley Robinson’s New York 2140, which takes place in a flooded Gotham. The moneyed Manhattanites have fled for higher ground in the Cloisters. The middle classes live in half-submerged midtown. The poor, finally, live in half-swamped “intertidal” zones where collapses and cholera are common.

How Housing Can Help?

Housing, therefore, is intimately related to the impacts of climate change. It’s also related to solving climate change. As futurist Alex Steffen has persuasively argued, building denser, more walkable cities is one of the premier ways we can cut back our carbon footprint.

It goes further than that: cities can’t just be dense, they need to have good, affordable housing. Sociologist Daniel Aldana-Cohen has argued that “working-class control of cities is crucial to bringing down carbon emissions.” A whole suite of working-class programs are also low-carbon, such as accessible mass transit, walkable and bikeable causeways, and jobs close to homes.

The Fee and Dividend Solution

You don’t need to look far to understand how a carbon fee and dividend would help ameliorate this. Our bill is projected to send a monthly rebate of $160 to a family of four by 2032. Crucially for addressing gentrification, that number is $270 for a comparative family of lower income. This gives residents who may have deep roots but shallower pocketbooks a leg up: the median DC two-bedroom apartment cost $3,190 a month last year. That means the rebate could cover 8 percent of rent, a sizable chunk.

Crucially, a solution needs to have a targeted solution for dealing with the fact that energy efficiency is often worst in housing occupied by the poorest. Utility bills are one of the main  reasons people resort to predatory payday loans, putting poor people in a vicious cycle where they can’t pay for the weather-proofing and other improvements that would help. (World Resources Institute, where I work, has written about ensuring equity in carbon pricing.)

For residents whose first need is meeting rent, the carbon fee and rebate will help keep DC habitable for its residents–in terms of a livable climate and in terms of affordable housing.