Nicole Bera, Put a Price on it Intern

I grew up on a farm in Wisconsin and my parents have always been very environmentally conscious. I did not realize how serious things were until I did a research project my freshman year of highschool.

I think it is one of the only effective ways to combat climate change on a local level. After Trump was elected and started deconstructing our federal 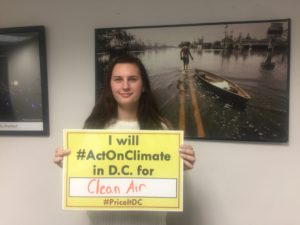 environmental policy, I knew that working on a smaller scale would be the only way the fight against climate change would continue in the US.

I have not worked on a environmental campaign before. I used to work for The Nature Conservancy which was the exact opposite of this campaign. As an intern at the nature conservancy, I would be outside doing hands on work like removing invasive species, assisting the DNR in collection species samples, and assisting on the Clean Boats, Clean Waters initiative.

I am lucky enough to have grown up in a place away from ocean coastline that does not suffer from earthquakes or prone to wildfires. What Wisconsin is known for is the cold. Due to climate change, the winters in Wisconsin have gotten colder and the summers have gotten hotter. There is also a frequent fluctuation of temperatures and a delay in the start of constant cold weather. This disrupts agriculture all year long leading to lesser yield and higher dependence on pesticides, fertilizer, and water.

It was great attending the 350 fossil free event. There was a variety of incredible speakers including Bernie Sanders, the mayor of New York City, and repestives of grassroots organizations from around the world.

Last year was my first year in D.C. Due to the presidential election it was quite an interesting year to be here to say the least. I was a part of the incredible Women’s March on Washington in January and multiple protests after the inauguration. While Trump is still in office, I think the women’s march showed the country and the president that we stand against him.

I am excited to see what I accomplish here at the campaign in the next few months!